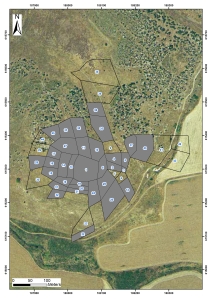 Continuing the recent series of posts, the next period to discuss is the Late Bronze Age.  the Late Bronze Age (1500-1200 BCE) is generally considered a period of Egyptian domination in the southern Levant, after the establishment of the New Kingdom and the expulsion of the Hiksos.  The famous Amarna Letters vividly describe the political upheaval that was part of the period, with local rulers warring amongst themselves, while paying tribute to the Egyptian overlords.

During this period, many sites see a decrease in settlement, with other sites abandoned completely.  it seems that sites are not fortified at all, and the urbanism that thrived in the Middle Bronze Age diminishes.  that said, the results at Tel Burna, show that the Late Bronze Age is very well represented, and it seems that the site was thriving during this period.  the surface finds dating to the LB cover an area of 6 hectares, and the number of LB sherds identified are more than any other period! It will be interesting to see whether the excavations confirm these findings, and if we have a very unusual trend of growth (and not diminishing) of a site in the LB!